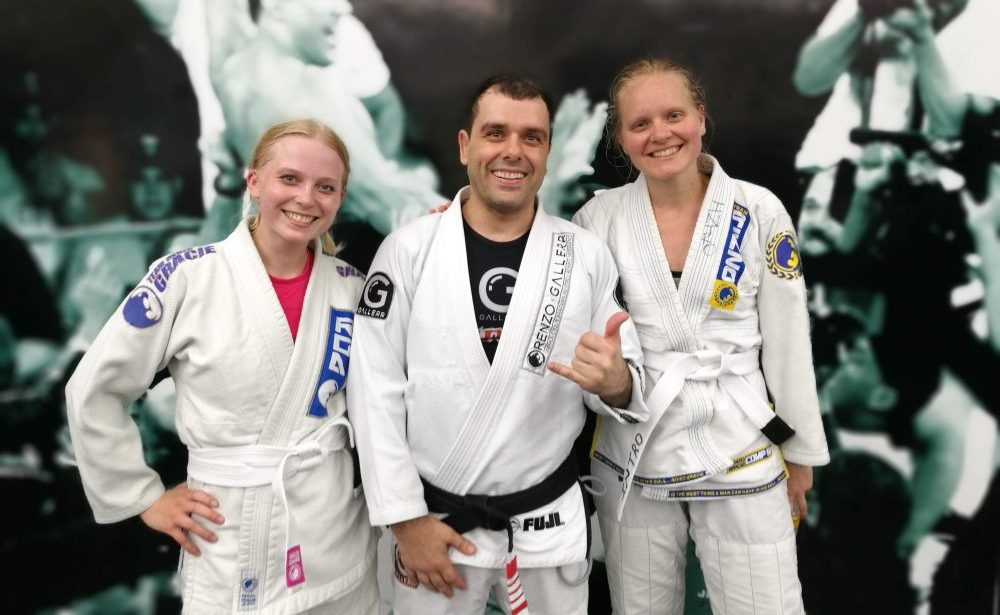 A jujutsu experience I will never forget

You know that feeling when you meet someone new and things just start to happen? That happened to us Friday night when we were spending the evening with Emily’s friends. We headed for Prospect Park after work and when it got dark, decided to continue the evening at Emily’s friend’s apartment in Brooklyn. A friend of the host’s, which nobody else knew, joined our crew during the evening. We started talking and he told us that he was into a martial art called jiujitsu. With a mojito and few glasses of wine under my belt and all the confidence in the world, I of course started getting hyped up about trying this amazing sport. All of a sudden, we had agreed to go to class with him on Monday.

So, Monday arrived, and we met in front of the Renzo Gracie Academy. I looked inside the huge window and felt my heart start beating a little faster. The training looked intense! Just as we were about to enter the academy, we heard that it’s actually one of the best martial arts academies in the whole world. How about that to spice up your nerves even more? We stepped in and were greeted with a thick, humid and hot air filled with testosterone. Everywhere we looked there were focused and admirably strong looking warriors. And I’m not kidding, they truly looked like warriors.

We were handed traditional jiujitsu uniforms called gis, and met some gentlemen wearing blackbelts. Our new friend Justin told us that we had just met some real legends in the jiujitsu world. You can probably imagine how small I felt in that very moment with my hair braided adorably into two little braids, half the size of everyone else, tucked inside a rental gi with a whiter than white belt tightened around my waist. I felt huge respect for all the people around me. They oozed peace, self-discipline and determination.

Our class started with a warm-up, which went surprisingly smoothly. I had been kind of scared of being in worse shape than I was, so it was a very positive surprise. After the warm-up we teamed up with Emily for the rest of the class as we were the only beginners there. We did different exercises alone and in pairs. We are both quite stubborn and fiery, so we really did put up a fight against each other. I learned to throw a person over my shoulder and other cool stuff. I was amazed with the warmth that we were welcomed with. Our teacher didn’t seem to mind at all about the fact that we were newbies and had no idea what were doing. He patiently gave us guidance and made sure we were keeping up.

It was very hot in the gym and the gi was very thick fabric, which did not breathe at all. After class we were literally soaked with sweat. My hair was so wet it felt like I had just taken a shower, and I truly felt like I had done a killer workout. Drained emotionally and physically. We left the class as winners as we had made it to the end without too many bumps and bruises. We talked with the teacher a bit after class and when I told him I was a writer, he shared that he was a journalist himself and had been one of the founders or a very renowned jiujitsu magazine. How cool is that?

A little over a year ago I participated in a Milfight class and enjoyed the empowering rush of martial arts and self-defense. I got that same vibe from this class and I just might have to start a new hobby when I get back to Finland. It will not be a very good evening hobby though, since the adrenaline rush was so powerful, I didn’t fall asleep until three in the morning. I strongly recommend jiujitsu if you like sports that are empowering, want to learn to defend yourself and get a killer workout for your whole body all at once!